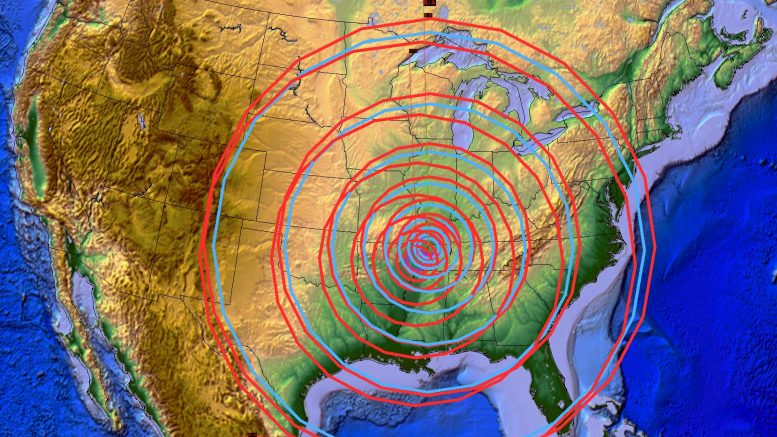 While many people may be shaking their heads at the notion of an earthquake that splits the country the fact remains that it is still a scientific possibility. So much so that governments and large corporations have already started to run test drills to see how they would react in such a situation

In October 2009, a team composed of University of Illinois and Virginia Tech researchers headed by Amr S. Elnashai, funded by the Federal Emergency Management Agency (FEMA), considered a scenario where all three segments of the New Madrid fault ruptured simultaneously with a total earthquake magnitude of 7.7. The report found that there would be significant damage in the eight states studied – Alabama, Arkansas, Illinois, Indiana, Kentucky, Mississippi, Missouri and Tennessee – with the probability of additional damage in states farther from the NMSZ. Tennessee, Arkansas, and Missouri would be most severely impacted, and the cities of Memphis, Tennessee and St. Louis, Missouri would be severely damaged. The report estimated 86,000 casualties, including 3,500 fatalities; 715,000 damaged buildings; and 7.2 million people displaced, with 2 million of those seeking shelter, primarily due to the lack of utility services. Direct economic losses, according to the report, would be at least $300 billion..

The part that I, along with many others worry about is that there are 15 Nuclear Reactors along this particular fault line! So if the worst does occur you are talking about a MAJOR catastrophe taking place.

So what would the United States look like if say, there was a large earthquake on this fault line: The blue portion shows you where the new coastlines would be.

So as you prep, stock up and spruce up your bug out plans you may want to consider factors such as fault lines in your research. Now granted it has been quite some time since something has happened along that fault line but to me that just means we are that much closer to an occurrence.

Now it has been quite something has happened along that fault line but to me that just means we are that much closer to an occurrence.

What are your thoughts? Do you plan for fault lines and earthquakes?