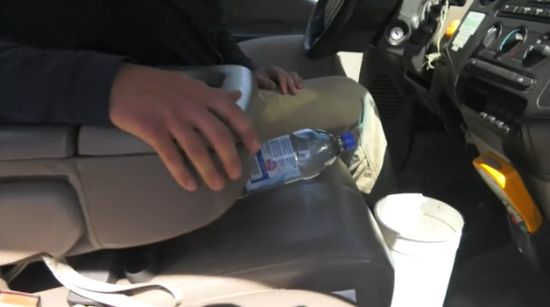 A water bottle may be all it takes to start a fire in the midst of a hot day. Surprised? We certainly were! It turns out that there is science behind the phenomenon to prove it. Take a look:

Amuchastegui was taking his lunch break when he noticed smoke inside his car.

“At first I thought it was dust, but the window was rolled up so there was no wind,” he told Today.

Amuchastegui claims the light reflected through his water bottle was so hot that it burned a pair of holes into his passenger seat. A thermometer records the light's temperature as 211 degrees. Did you know that on a hot day, a see through water bottle in your car has the potential to start a fire? Neither did Stations Battery Technician Dioni Amuchastegui.

To do a little mythbusting, David Richardson from the Midwest City Fire Department took a water bottle outside on a hot day.

He revealed that water bottles are actually more dangerous than anyone realized – under the right circumstances.

Using nothing but a dark piece of paper and a water bottle, Richardson managed to reach temperatures over 400 degrees and started a fire. But he also advises viewers to keep a few things in mind: “This is a clear bottle with a clear fluid in it,” he explains, “it this was empty or partially filled, it probably wouldn't have worked.” That's because the water inside the bottle is what magnifies the light, concentrating it on a single point.

Can a bottle of water start a fire?

Can a bottle of water start a fire?After numerous comments and questions about the actual possibility of a water bottle being able to start a fire, we put it to the test today! It did in fact work! (See the attached video).PLEASE keep in mind that many factors must be in place for this to occur. The likelihood of this happening in a vehicle and sustaining a fire is probably very small. We do not endorse or condone this activity. This was conducted in a controlled environment for demonstration purposes only!

What do you think of this water bottle anomaly?