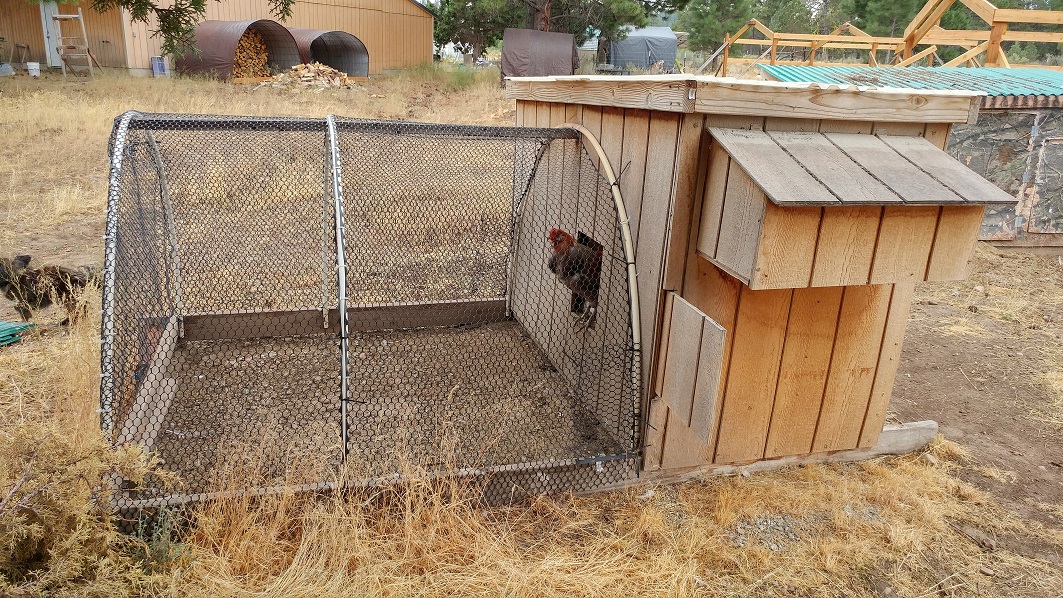 A tractor, as opposed to a stationary coop, provides you with several benefits: mobility for both the chickens and the tractor itself, fertilized ground due to chicken droppings and less frequent mowings due to the chickens’ diet of grass. These DIY tractor ideas will inspire you to renovate your chickens’ housing!

A chicken tractor is any bottomless pen or cage that can be moved from one area to another. This allows the poultry to eat things on the ground, such as vegetation and bugs, while still keeping them contained. Chicken tractors may have wheels or skids to be pulled along the ground, and are an excellent alternative to free-ranging if you live in an urban/suburban setting or an area with a large number of predators. This is the one we still prefer. We’ve made them in 8-foot and 12-foot lengths, with an 8-foot width. It’s just a framework with cattle panels bent from one side to the other to create a tunnel, ends finished with plywood or netting, and a tarp over the top for a roof.

They are lightweight enough that one person can move it. They also can be moved quite easily with a quad or even a riding lawnmower.

Strong winds can move or even flip them over. Because of the raised cross pieces, small predators such as skunks, weasels and even smaller raccoons are more likely to get into the pen.

We built a skid framework, added a floor and mounted the house on skids, then added a simple run along the front. I did a little work to the roof, added a nest box and perch, plus built a new closing door and cut a smaller door to the run. I had the whole project done in just a few hours.

My biggest regret with this one is simply that I didn’t put a door into the run for us! Fortunately, it is lightweight enough to be lifted.

The Little Red Coop and The White Hen House We did the same thing as with the Dog House. We mounted the houses on the skids, then built a yard. With some hinges added to the top panels and a hook to close it, the yard is accessible if we need to open it up for any reason. Again, the pen is very light and can be lifted up if we need in it. This is by far the heaviest of the houses we’ve built.

Basically, we just added some OSB scrap to make a floor, sided it with leftover plywood siding, built a roof and a nest box and cut in a couple doors. The whole thing is mounted on skids, and the yard is made of PVC pipe with some used plastic chicken netting attached to it via zip ties.

The faults with this pen are pretty minimal, the biggest being the weight. I’m also not sure I would use the plastic netting again, as it does rip after three summers in the sun.

Have you tried any of these DIY chicken tractors for your homestead? Which one is your favorite?